A Brief History of Gift-Giving in the United States

For children and adults alike, Christmas means stacks of gifts exchanged with family and friends. Undoubtedly, gift-giving has become a very deeply rooted tradition that we all associate with the birth of Christ – a gift of hope and salvation – yet its history, and that of Christmas, is actually more of a combination of pagan beliefs and traditions and the early church’s decisions to incorporate themes from non-Christian sources. To understand how gift-giving came to be so intricately associated with Christmas, an understanding of the origins of Christmas has to be first examined.

The Christmas Day as we know it today was actually influenced by what was happening in Rome back when Christianity was in its infancy. From December 17 to December 24, people in Rome celebrated Saturnalia in honor of Saturn, their god of agriculture. Unlike the family-centered celebration that we know of it today, Christmas’ early influence back then was an occasion of upending social customs. During Saturnalia, slaves donned their masters garb and refused to take orders, and children need not obey their parents or any adult.

There was also plenty of drinking, gambling, caroling for money, carousing, feasting, and yes, gift-giving that the week-long festivity was as raucous as one could possibly imagine. Church leaders in the 4th century (who at that time had not dedicated a special date for celebrating Jesus Christ’s nativity) decided that Christianity should also have similar celebrations to rival what was then a very pagan festivity. The Church leaders eventually elected to celebrate the birth of Jesus Christ on December 25, which coincidentally occurred with the “birth of the sun" after the winter solstice.

The gift-giving tradition of Saturnalia, however, had a macabre precedent, as children were given wax dolls that symbolized the Romans' human sacrifice to Saturn in exchange for good harvests. In Norse mythology, gift-giving had something to do with the god Odin’s nighttime visits. Children would leave carrots, straw and similar food in their shoes for Odin's horse to eat. In exchange, Odin would leave candy and other treats in their place. In 13th century, French nuns would give presents to the poor on St. Nicholas' Eve to commemorate the generosity of the bishop from Lycia whom we now know as the inspiration for Santa Claus.

For Christians, the gift-giving precedent was set by the Magi, or The Three Kings, who gifted the Infant Jesus with gold, frankincense, and myrrh. While most of the Christian world exchange gifts on December 25, some Eastern Orthodox churches celebrate what approximates as exchanging gifts on the Day of Epiphany on January 6.

In the United States, it was only in the 18th century, however, that the gift-giving traditions that have come to partly define modern Christmas took on their form. By 1820, stores placed Christmas-themed ads in newspapers. Children loved this spirit of gift-giving so much that by 1840 they began hanging stockings in anticipation of gifts. It was also around this time that Santa Claus popped up in advertisements as the symbolic bearer of gifts. Two decades later, Macy's opened its department stores until midnight on Christmas Eve to allow last-minute shopping for gifts. Around 1868, Charles Dickens' 'A Christmas Carol' was circulating in the United States. By 1870, when the United States Congress declared December 25 as a federal holiday, nobody wanted to be a Scrooge.

These influences – raucous pagan celebrations, the myth of Santa and Odin, acts of charity – have helped inject a feeling of generosity and good cheer into what we now practice as exchanging gifts during the yuletide season. True, the Christmas holiday has taken on a commercial dimension, but the spirit of giving the best that we have remains. 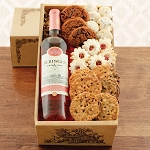