Some of the Best Free Verse You'll Find

Prose and poetry are pretty distinct forms of writing. One is done in a paragraph form, while the other has rhythm and meter and some rhyme.

As our website portal is called giftprose.com, we enjoy the written word in all its forms - even if its' a hybrid of the prose and poetry forms, such a free verse. Free verse is that writing that is formatted like a poem or sonnet but have virtually no rhyming at the end of lines. Some of the lines end and start and weird points , but they are deliberated written that way so as to project a certain message or emotion, based on the subject matter of the piece.

And while determining "great" poetry and prose is wildly subjective we can at least show you what we think are at least good examples of free verse poetry, from some of the most well-known poets and writers of all time. You may be familiar with some of these works, but we would encourage you to read some of these yourself regardless of your past exposure. Maybe some of this will give you inspiration of what to include on your next note of thanks or affection that is attached to your next gift.

See if there are some fitting words contained in some of these works:

"The Garden" by Ezra Pound

"The Snow Man" by Wallace Stevens

"I, Too, Sing America" by Langston Hughes

Song of Solomon in the King James Bible. 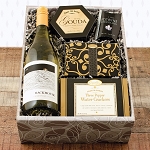