The Origins of Cheesecake 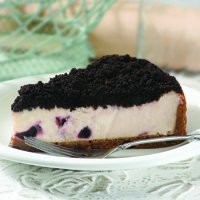 According to John Segreto's book, Cheesecake Madness, cheesecake has the roots of its origins in ancient Greece, food of the Olympians. Over the centuries it has changed from an energy food to a gourmet dessert.

History shows that the first recorded mention of cheesecake was by the Greeks, in 776 B.C. The ingredients of cheese (pounded into a paste substance), honey, and wheat flour where shaped into cakes, baked, cooled and served as energy food to these first Greek Olympians. In no time the Greek cheesecake became a popular delicacy that was the precursor to the wedding cake. It was customary for the Greek bride to prepare and serve mini cheesecakes to the groomâ€™s friends â€“ this came to be known as the wedding cake. In time the Romans defeated the Greeks and over the centuries continued their conquest of Europe and the British Isles spreading their culture which included the cheesecake. In time, different cultures put their own spin on the recipe and developed their own versions of the cheesecake. Eventually immigrants brought their different cheesecakes to the shores of the USA.

The modern cheesecake is described as a gourmet dessert cake or pie whose main ingredient is cottage cheese, cream cheese, or ricotta.

Cheesecakes in the United States are usually of one of the two following varieties. The most common is the Jewish cheesecake, commonly known as the New York Style cheesecake is a cream cheese based cake set on a graham cracker crust. Different variations of this dessert have evolved over time by adding different flavors and toppings, these can range from such flavors as Key Lime, chocolate, and numerous fruit flavors such as Mango Chai Cheesecake.

The second common variety is the Italian cheesecake which usually includes ricotta cheese and bits of candied fruit, placed on a pastry crust.

Traditionally cheesecake is high in calories and fat but todayâ€™s modern developments of sugar substitutes and low fat ingredients have made this dessert available in tasty selections such no sugar added cheesecakes and even sugar free cakes with no loss of flavor.

A baking hint for those who make their own, just add a little cornstarch to the batter and this will keep your cheesecake from cracking when it cools.